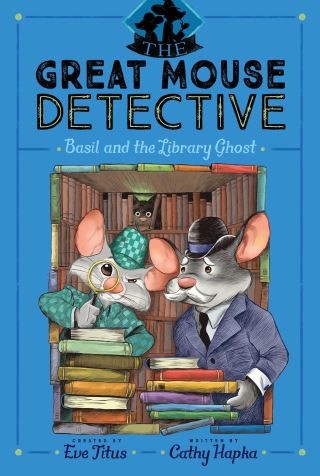 Basil and the Library Ghost

The inspiration for a hit Disney film and named one of “13 Detective Book Series You Obsessed Over as a Kid” by BuzzFeed, the masterful Great Mouse Detective is back and ready to investigate a library haunting!

Basil of Baker’s Street, the masterful mouse detective who studied under Sherlock Holmes, is on his way to a school reunion with his old friends from Ratcliffe College. Along for the trip is his steadfast companion, Doctor Dawson. But all is not well, as they soon learn that the dastardly Ratigan has escaped from prison in London. Could the rat possibly be planning revenge against his old nemesis, Basil himself?

But before Basil and Dawson can worry too much about the wily rat, they hear another piece of worrying news. The duo arrives in Oxford only to be informed that the library of Basil’s old college is haunted! The students are thoroughly spooked, and the whole mess threatens to sour the festive mood of the reunion. Basil, for one, doesn’t believe in the supernatural and plans to put the rumors to rest.

But the strange occurrences continue, without any obvious explanation. Is this one case that can stump even the Great Mouse Detective? And as Basil and Dawson dig deeper, are there even more sinister secrets afoot?

Eve Titus: Eve Titus (1905–2002) wrote many books for children during her long career, including the Basil of Baker Street books and the Anatole series.Cathy Hapka has written more than 100 books for children and adults. She’s written for series as a ghostwriter and has also authored original titles. She lives in Pennsylvania.Dave Mottram is an illustrator living in Ohio who worked as a graphic designer for many years which led him to pursue his passion for illustration. He paints traditionally and digitally with color and layers and line. He loves tacos, animals, tikis, and nerding out over art supplies. Visit him at DaveMottram.com.