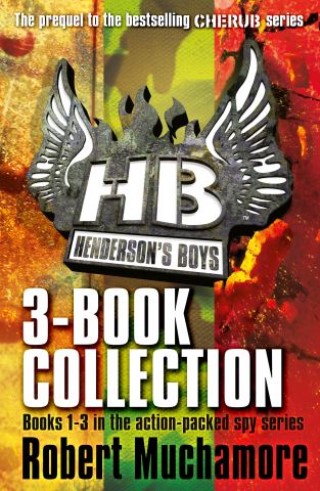 Books 1-3 in the action-packed spy series

Books 1, 2 and 3 in Robert Muchamore's Henderson's Boys series, the prequel to the bestselling CHERUB series

The Escape (Book 1):
The very first CHERUB adventure is about to begin ...

Hitler's army is advancing towards Paris, and millions of French civilians are on the run.

Amidst the chaos, two British children are being hunted by German agents.

British spy Charles Henderson tries to reach them first, but he can only do it with the help of a twelve-year-old French orphan.
The British secret service is about to discover that kids working undercover will help to win the war.

Hitler has conquered France. Now he intends to cross the Channel and defeat Britain before winter arrives.

A group of young refugees led by British spy Charles Henderson faces a stark choice. To head south into the safety of neutral Spain or go north on a risky mission to sabotage the German invasion plans.

The government is building a secret army of intelligence agents to work undercover, gathering information and planning sabotage operations. Henderson's boys are part of that network: kids cut adrift by the war, training for the fight of their lives. They'll have to parachute into unknown territory, travel cross-country and outsmart a bunch of adults in a daredevil exercise.

In wartime Britain, anything goes.

Praise for the CHERUB series:

'Punchy, exciting, glamorous and, what's more, you'll completely wish it was true' - Sunday Express
'Crackling tension and high-octane drama' - Daily Mail
'A really good book that you could re-read over and over again' - Guardian
'Pacy writing, punchy dialogue and a gripping plot, it's got it all' - Daily Express
'Fast-moving action ... and cool gadgets!' - The Times