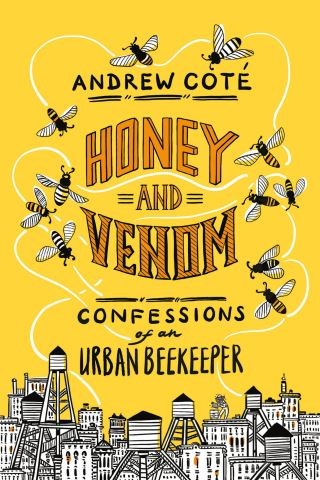 Confessions of an Urban Beekeeper

A year in the life of New York City’s premier beekeeper, who chronicles his adventures and the quirky personalities he encounters while spreading his infinite knowledge of and passion for the remarkable honey bee.

“Coté’s charming and poignant essay collection delivers the entertainment and smarts required to make real change in how we look at our planet—and ourselves.”—Andrew Zimmern

Considered an “industry legend” by The New York Times, Andrew Coté has one of the most intriguing, challenging, and unique jobs in New York City—maintaining millions of honey bees atop some of the city’s most iconic buildings. His apiaries have crowned the Waldorf Astoria and the Museum of Modern Art; reside on the North Lawn of the United Nations; reign above stores, hotels, restaurants, schools, churches, and synagogues; and are situated in community gardens, and even cemeteries, throughout the five boroughs.

In this debut collection, Coté takes readers with him on his daily apiary adventures over the course of a year, in the city and across the globe. Here, among his many duties, he is called to capture swarms that have clustered on fire hydrants, air-conditioning units, or street-vendor umbrellas. Annually, he travels with his father to regions like remote Fijian islands, rural Uganda, Haiti, Ecuador, or Iraq with his organization, Bees Without Borders, where he teaches beekeepers how to increase their honey yield and income via beekeeping endeavors.

Written with Coté’s trademark humor, acumen, and a healthy dose of charm, Honey and Venom illuminates the obscure culture of New York City “beeks” and the biology of the bees themselves, from the humble drone to the fittingly named worker to the queen herself—who is more a slave than a monarch. The hive world, Coté reveals, is full of strivers and slackers, givers and takers, and even some insect promiscuity—startlingly similar to the prickly human variety.

For Coté, a fourth-generation beekeeper, this is a family tradition, and this personal significance pervades his celebration of the romance and mystery of bees, their honey, and the beekeepers whose lives revolve around these most magical creatures.

Andrew Coté: Andrew Coté is New York City’s most well-known beekeeper. A fourth-generation apiarist, he is founder of the New York City Beekeepers Association, executive director of the nonprofit Bees Without Borders, polyglot, Fulbright scholar, black belt in aikido, and former college professor. Coté and his bees have been featured on The Martha Stewart Show, CNN, CBS, Cake Boss, Dr. Oz, Nightline, Good Morning America, and Today, and in The Wall Street Journal, The Atlantic, The New York Times, HuffPost, and many other news outlets around the world. Coté also runs Andrew’s Honey out of the NYC Union Square Greenmarket.